A tropical disturbance east of the Philippines could develop into this year’s second tropical storm or typhoon in the northwestern Pacific, the Central Weather Bureau said yesterday.

It could strengthen into a tropical depression today, as it passes through the Philippines’ Luzon Island and the South China Sea on its way toward Hong Kong and China’s Guangdong Province, the bureau said.

The tropical depression would likely develop into a tropical storm or a typhoon when it moves through the South China Sea, the bureau said, adding that it would monitor its development to determine how it might affect the nation.

The tropical storm would be named Nuri once it is formed, which means “parrot” in Malay, it said.
[FULL  STORY] 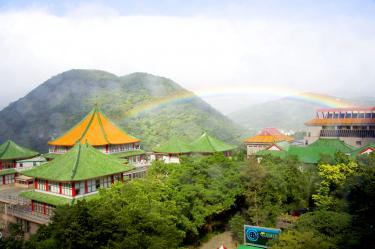 A rainbow recognized as the world&rsquo;s longest-lasting stretches across Taipei&rsquo;s Yangmingshan on Nov. 30 2017.
Photo provided by Chinese Culture University via CNA

aimed at helping tourists, meteorologists and photographers know when and where to find rainbows.

Atmospheric science professor Chou Kun-hsuan (周昆炫) said earlier this week that the “Rainbow Weather Index” is based on data from the Central Weather Bureau and the university, such as precipitation, wind speed, wind direction and humidity.

After months of adjustments, Chou launched the system and said it is now 85 percent accurate in predicting a rainbow.

“We hope the service, which is only available for this region, can attract more people to look for rainbows on our campus,” Chou said.    [FULL  STORY] 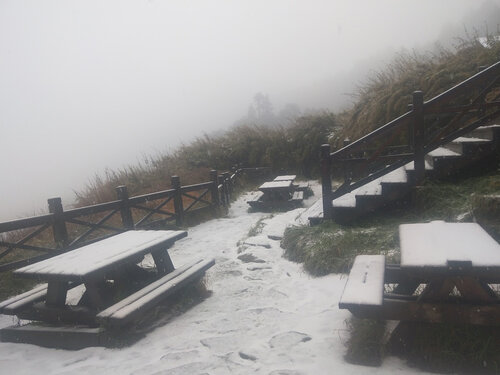 Photo courtesy of the Bunun Mountaineering Team[/caption] Taipei, Dec. 6 (CNA) Snow fell on Xueshan, Taiwan's second-highest peak, on Friday as seasonal northeasterly winds and a cloud system from the south brought abundant moisture to the country.


Sleet started falling at 1:48 a.m. on the 3,886-meter mountain before snow began falling at around 9 a.m., according to Shei-Pa National Park management office.

It was the first snow in Taiwan this winter season.

Based on reports received by the CEOC as of 10 p.m. Monday, the four victims from Taipei and Yilan County all suffered minor injuries, and have either been discharged or are receiving treatment at local hospitals.    [FULL  STORY]

1.2 million people in SW Taiwan could be displaced by flooding due to global warming by 2050 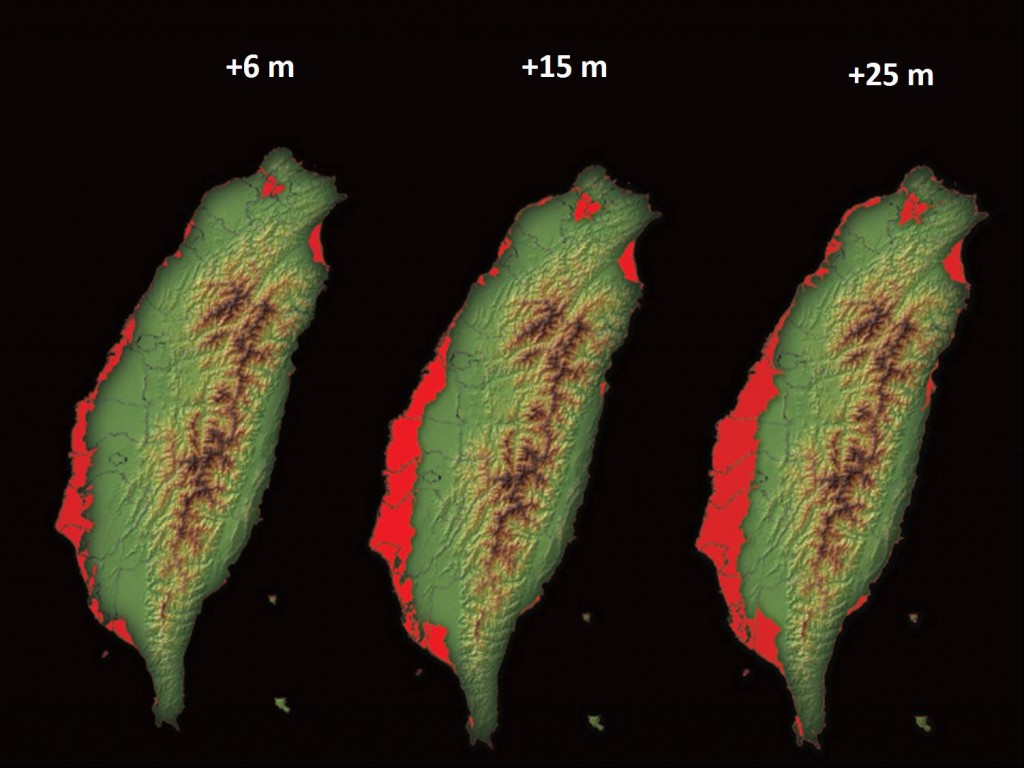 TAIPEI (Taiwan News) — Southwestern Taiwan, including Tainan City, in particular, is expected to be the region most heavily impacted by global warming, affecting over 1.2 million people, according to the environmental protection group Greenpeace.

On Sunday (Sept. 22), Greenpeace set up an 250-centimeter-tall ice sculpture inscribed with the Chinese characters "climate crisis" in Taipei's Ximending area, reported CNA. Greenpeace representatives at the exhibit said that if action is not taken quickly, 310 square kilometers could be submerged in Tainan by 2050.

Through the melting of the ice sculpture, Greenpeace activists hoped to raise awareness of global warming and demanded that Taiwan's 2020 presidential candidates propose sustainable solutions. They said that government leaders should actively respond to the crisis with a new energy policy.

The activists said that if Taiwan and the world do not take measures to actively reduce greenhouse gas emissions by 2050, an estimated 1,398 square kilometers of Taiwan's southwestern coastal areas could be flooded, the equivalent to 5,377 Da'an Forest Parks, according to the report. The environmental organization estimates that over 1.2 million people in Taiwan could be displaced by this flooding, with Tainan City the most heavily impacted area.    [FULL  STORY]

SEVERE IMPACT: NT$25.26 million worth of crops were damaged, affecting vegetable prices, and 3,436 people were forced to evacuate their homes 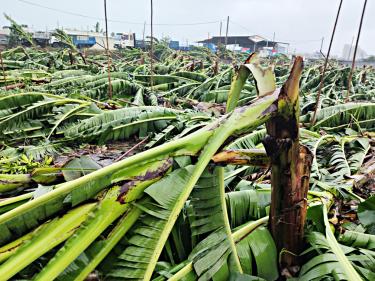 An 18-year-old drove a motorcycle into a fallen tree in Tainan at 11:49pm on Saturday and died after branches punctured his chest, the center said.

Two other people — a 21-year-old woman on a scooter and a 32-year-old man on a motorcycle — were injured in Tainan after driving into trees that had fallen into the street.

In Nantou County’s Yuchih Township (魚池), a 73-year-old man and a 48-year-old woman were hurt when trees fell on them.    [FULL  STORY] 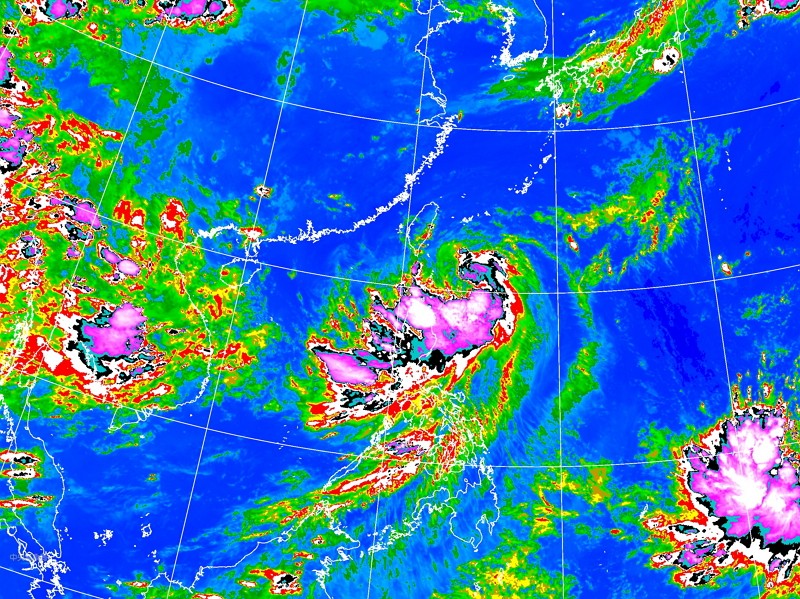 Updates on closures can be followed on the table from the government's personnel agency.

Kaohsiung first only announced the cancellation of work and classes for five districts all known for landslides during previous typhoons, but it later expanded it to cover all of the city for Saturday.
[FULL  STORY]

MANILA – Local airlines have announced the cancellation of flights to Basco, Batanes and Taipei, Taiwan and their respective return trips on Friday due to the effects of Typhoon Hanna.

The following are affected flights as of 8 p.m. Thursday:

PAL said affected passengers may rebook and refund within 30 days from their original flight date, with rebooking or refunding fees waived.    [SOURCE]

Sunny skies and high temperatures expected across the country 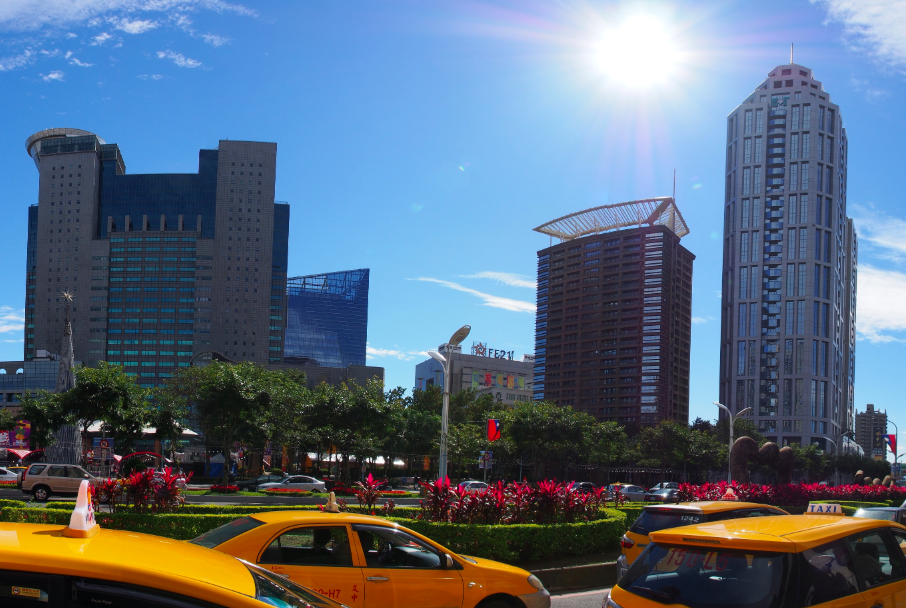 TAIPEI (Taiwan News) — Taiwan is to experience summer-like weather from Sunday (May 12) through next week as temperatures hit 35-degree highs in some regions, according to the Central Weather Bureau.

Temperatures are to remain stable throughout the week, the bureau said, with the majority of areas witnessing clear or cloudy skies. All regions will experience cool and comfortable morning and evening low temperatures of between 22 and 25 degrees Celsius.    [FULL  STORY]

Under the effects of northeasterly winds, rainy weather is expected across the country through Monday 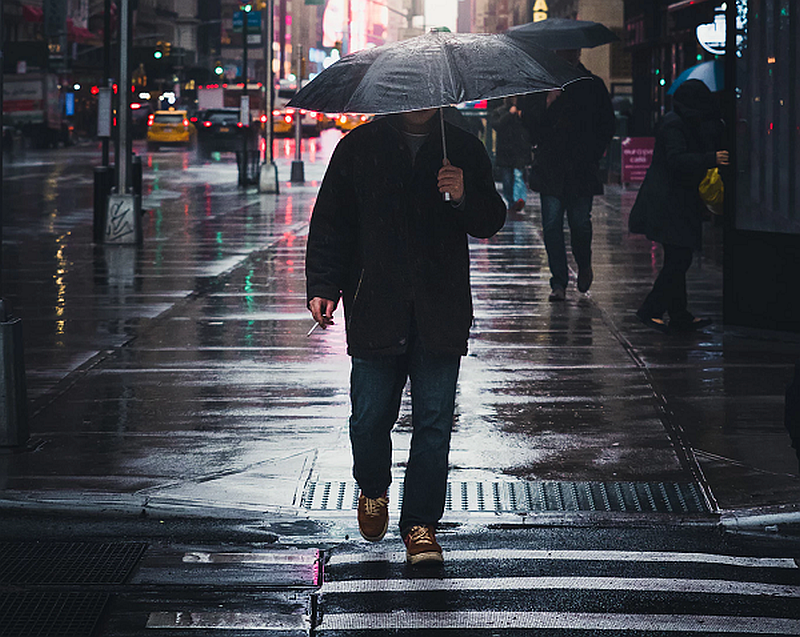 TAIPEI (CNA) — Under the effects of northeasterly winds, rainy weather is expected across Taiwan through Monday, when another front will be approaching the country, according to the Central Weather Bureau (CWB).

On Sunday, the mercury fell to 13 degrees Celsius in northern Taiwan in the early morning — the lowest throughout the country, the CWB said.

In areas north of central Taiwan as well as Yilan and Hualien counties, temperatures dropped to 14-16 degrees early Sunday, while those in southern Taiwan and Taitung County slid to 17-18 degrees, it said.

Although the seasonal wind will begin to weaken during the day, temperatures throughout Taiwan will rise by only 1-2 degrees due to a cloud system from southern China, the CWB said.    [FULL  STORY]