KMT REPORT: The party blamed ‘Internet armies,’ the party’s choice of legislator-at-large nominees and its inability to win over young people for it results the elections 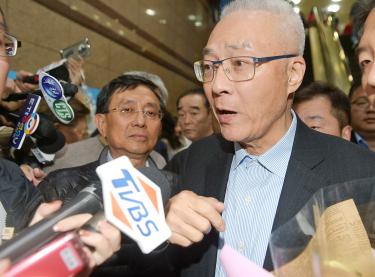 the KMT Central Standing Committee, while the party listed in a report seven major reasons for its defeat in Saturday’s elections.

In the report, the KMT said the major factors in its defeat were that the “sense of the nation’s impending doom” (亡國感) was greater than “hatred toward the Democratic Progressive Party [DPP]”; the KMT could not control the discussion on cross-strait relations and respond to changes; “Internet armies” swayed public opinion, challenging candidates’ images and making it difficult for them to win over independent voters; the victory in Kaohsiung’s mayoral election could not be replicated and a mistake was made regarding the choice of campaign strategy; internal conflicts within the party, lack of unity and campaigning that could have been improved; the party’s list of legislator-at-large nominees did not meet public expectations; and the party was unable to win the favor of young people, who are highly engaged in politics.

The report said that because Kaohsiung Mayor Han Kuo-yu (韓國瑜), the party’s presidential candidate, announced his candidacy less than six months after becoming mayor, his trustworthiness was questioned.    [FULL  STORY]