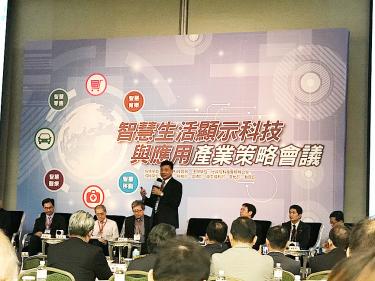 more support from the government, including a share of the government’s technology fund, to help the industry overcome challenges.

The government has not come up with industry-specific policies or funds to facilitate the LCD sector’s development, while Chinese rivals rose to global leadership in terms of shipments on the back of heavy government subsidies, the companies said.

AUO hopes the government will provide more financial support to the LCD industry and remove barriers to facilitate industry integration, AUO chairman Paul Peng (彭雙浪) told a conference held by the Executive Yuan’s Board of Science and Technology at the Taipei International Convention Center.

As flat-panel displays are an important interface for smart living, the government should earmark a budget over the next four to five years and push for technological upgrade of new displays used in smart living and new applications, Peng said.    [FULL  STORY]