STORMY SEAS: A buoy stationed near Oluanpi that was designed to monitor typhoons and other extreme weather was found far away from its original position 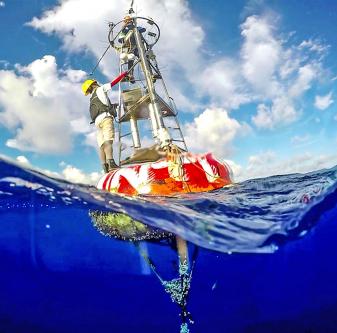 A team at the institute in 2015 started deploying two buoys (named NTU1 and NTU2) in waters 375km and 175km off the coast of Oluanpi (鵝鑾鼻) for collecting in-situ data of air and sea conditions to improve typhoon forecasts, institute associate professor Yang Yiing-jang (楊穎堅) said.

The buoys have resisted 14 typhoons, thanks to their solid anchoring 5.5km below the surface, he said.

However, the team last month found the NTU1 buoy had unexpectedly drifted away from its position, and they immediately convened members to board Ocean Researcher I to look for it, he said.    [FULL  STORY]