The fourth film in the series focuses on the relationship between Ip Man and his greatest student, Bruce Lee 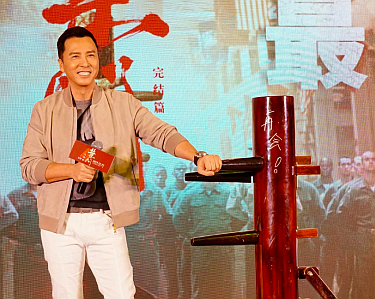 “Ip Man 4” will be the final bow for Donnie Yen in the title role. (Sky Film photo)\

The classic kung fu film series, Ip Man, has been running for a decade. Dozens of popular scenes have in that time been created by Yen, such as the three-minute fight with boxer Mike Tyson.

Among all Ip Man’s apprentices, his relationship with Bruce Lee (李小龍) is the most intriguing one. Despite the heated fight scenes in 'Ip Man 4,' the film mainly focuses on the relationship between the master and Lee, played by Hong Kong actor Chan Kwok-kwan (陳國坤) — who looks just like Lee himself.    [FULL  STORY] 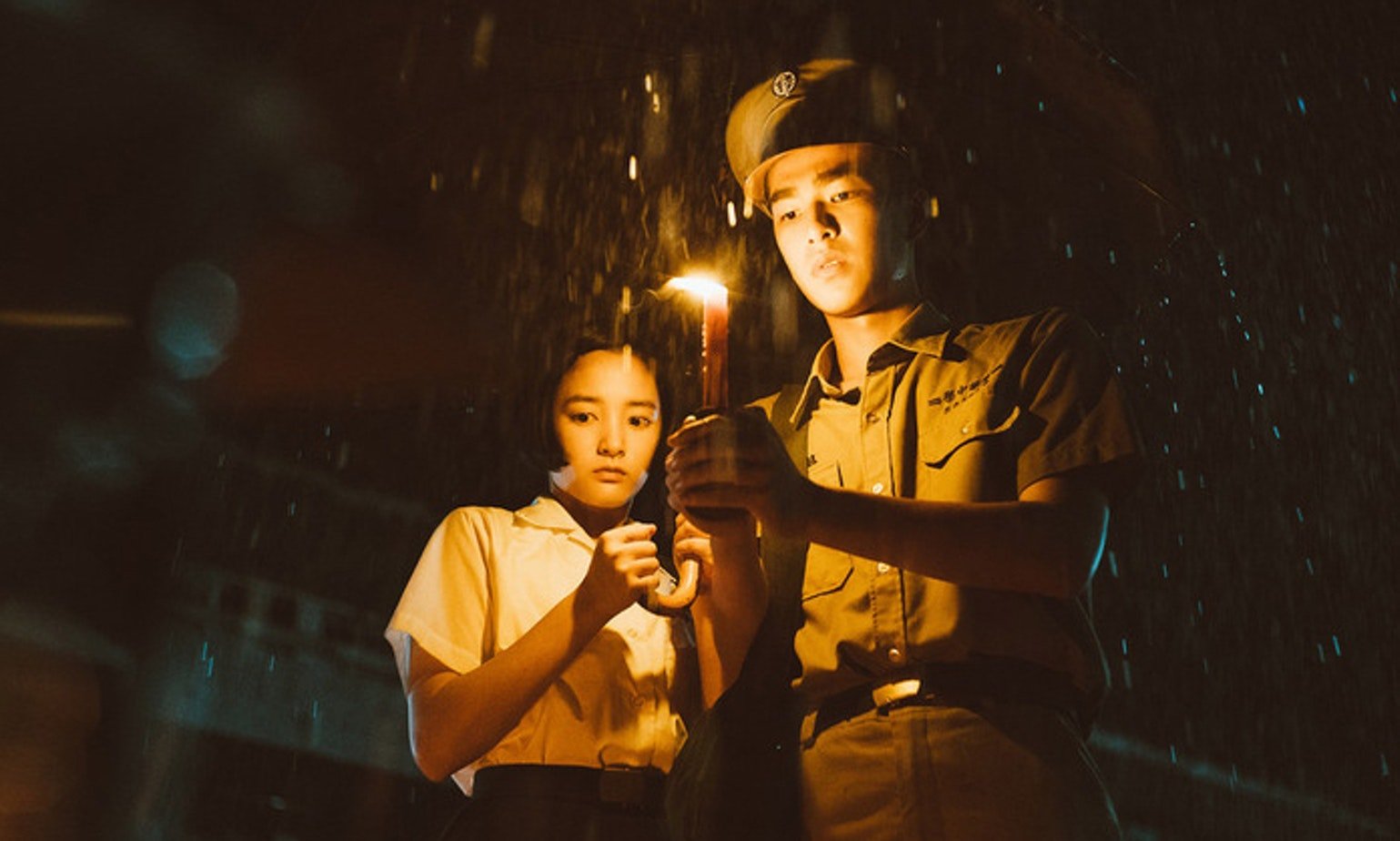 “Have you forgotten or are you scared of remembering?” This eerie quote from the recent Taiwanese horror film Detention (返校) has become a catchphrase among the twentysomethings.

For the younger Taiwanese who never lived through an authoritarian era, they might just use the haunting question to mock their forgetful friends. But it alludes to a traumatic history that’s still relevant today.

Adapted from a survival video game of the same title, Detention is the first feature film directed by John Hsu. The film has received widespread attention for its attempt to explore — or exploit — a highly sensitive topic: Taiwan’s martial law period between 1949 and 1987. It was one of the world’s longest martial law periods, during which hundreds of thousands of Taiwanese were jailed or executed for their alleged opposition to the authoritarian government Kuomintang.

Set in the fictional Greenwood High School in 1962, the first segment of the film, “Nightmare,” opens with a female student, Fang Ray-shin (Gingle Wang), waking up from a nap and finding herself in a ghostly classroom with broken windows and chilling winds. In an act that mimics the original gameplay, Fang lights a red candle that becomes the only light source leading us from one dimly-lit scene to another.    [FULL  STORY] 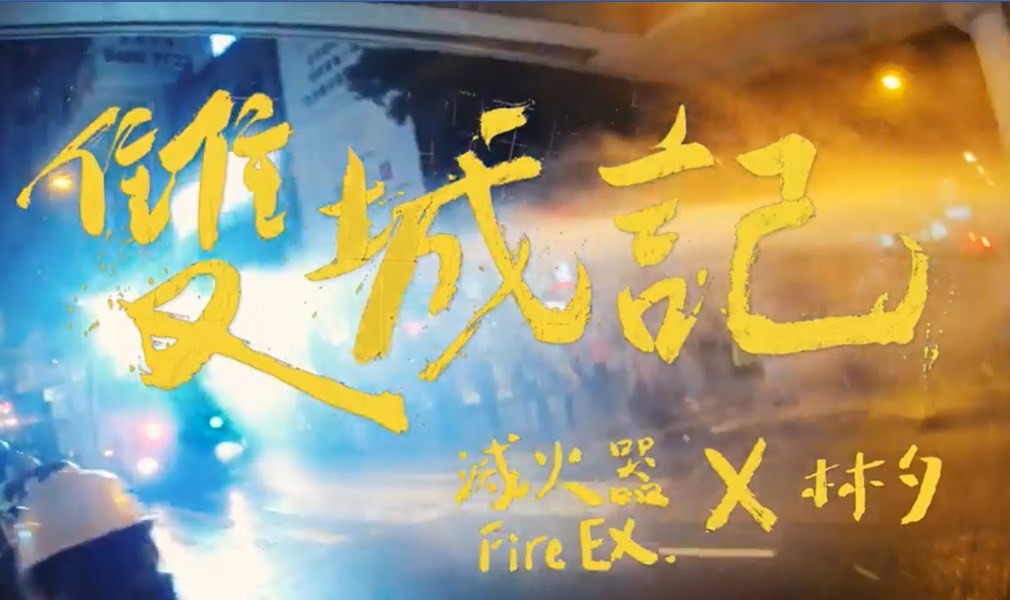 “A City of Sadness” by Fire Ex. with Albert Leung (photo from Facebook). (CNA photo)

TAIPEI (Taiwan News) – Taiwanese rock band Fire Ex. (滅火器) and Hong Kong songwriter Albert Leung (林夕) have collaborated on a song in support of the Hong Kong pro-democracy protesters, with the title of “A City Of Sadness,” reminiscent of Taiwan’s own 228 Incident.

The four members of the Kaohsiung rock group have a history of supporting student activism in Taiwan, while the new song, with a Chinese title which can be translated as “A Tale of Two Cities” (雙城記), bears the same official English-language title as the 1989 Hou Hsiao-hsien (侯孝賢) movie about the 228 Incident, the large-scale repression of a Taiwanese uprising by the Kuomintang government in which thousands of people died, and which was followed by the White Terror period of executions, disappearances and banishment.

What Hong Kong is going through today, looks more and more like what Taiwan went through 70 years ago, Fire Ex. members wrote on their Facebook page.    [FULL  STORY]

The key to a good joke is the timing. More generally, a joke is funny because of its delivery rather than the content. Canadian stand-up Norm Macdonald is famous for his hilarious execution, which gets people to laugh at things that they really shouldn’t laugh at. As a cishet man, I have the privilege of turning my brain off and enjoying the impeccable comic setups of the many queerphobic jokes in The Gangs, the Oscars, and the Walking Dead (“江湖無難事”). The undeniable humor of these jokes is a problem for the audience (including me), and an even bigger one for the film.

Gangs is about BS (Roy Chiu) and Wenxi (Huang Di-yang; the character’s name roughly translates to “bound to fail”), two childhood friends who decide to make a zombie movie. The production gets derailed, they run out of money, and they end up working for a mob boss (Lung Shao-hua). Their wedding video work for the Boss convinces him to finance their movie, with a proviso: The female protagonist, a pure and innocent high schooler who’s dating her teacher, must be played by his, um, lustful squeeze, Shanny (Eleven Yao). Soon after, she has a fatal disagreement with some poolside concrete. But the show must go on.

Director Kao Pin-Chuan displays a stylized mastery of filmmaking technique that’s a wonder to behold. He and his editor, Shieh Meng-Ju, have an almost preternatural sense of comic timing that amplifies every slightly awkward moment into a laugh-out-loud gag. The camerawork guides the events of the film: it alternatives between energetic handheld shots that propel the narrative forward and static close-ups that allow momentous events to sink in. Better yet, cinematographer Garvin Chan lights even the darkest image just enough to make it comprehensible, something a surprising number of contemporary films fail to consistently do.

This exemplary technique, however, is used to paper over the film’s questionable sexual politics, slapdash plot, and presumptuous world-building. Unexpected events often happen to our two leads (and their accomplices), keeping them on their toes. But they often get away with their shenanigans only because the script (by Tsai Yi-Ho and Birdy Fong) declines to give us their comeuppance scenes. Or when it seems like they’re doomed for sure, the Boss suddenly does an about-face. It’s a series of comic set-pieces strung together with excuses.    [FULL  STORY] 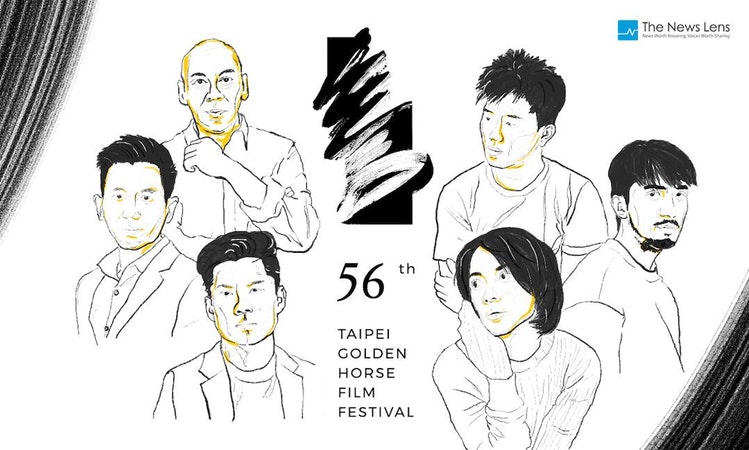 Toh Jin Xuan is a Malaysian-born Chinese based in Taipei and an editor for The News Lens ASEAN Edition.

Malaysian-born filmmaker Tsai Ming-liang (蔡明亮) had angrily withdrawn from the 2006 Golden Horse Awards because the panelists criticized his film I Don’t Want to Sleep Alone as “overindulging in his personal style.”

Perhaps Tsai was right about Taiwan’s tolerant attitude. Despite China’s aggressive boycott campaign to withdraw Chinese and Hong Kong films from the Golden Horse this year, the nominations included more Sinophone films from Taiwan, Malaysia, Singapore, and more. In other words, China's boycott has only further credited the Golden Horse as an international and prestigious film award in the Sinophone world.    [FULL  STORY] 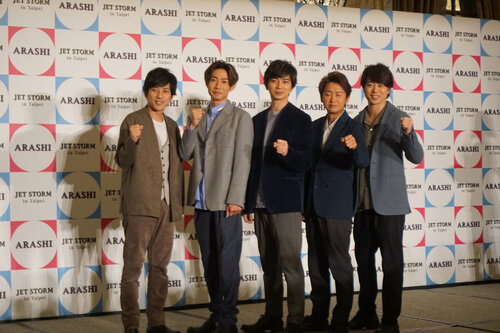 Taipei, Nov. 11 (CNA) Japanese boy band Arashi made a quick stop in Taipei on Monday as part of its promotional tour "Jet Storm" and hinted at the possibility of a concert in Taiwan next year.

It was the first time since 2008 that Arashi — comprised of members Masaki Aiba, Satoshi Ohno, Jun Matsumoto, Sho Sakurai and Kazunari Ninomiya — had visited Taiwan as a group.

At a press conference Monday, the group briefed fans on their upcoming plans, including scheduled performances at New National Stadium in Tokyo on May 15-16, 2020, and a concert in Beijing next spring.

Sakurai said the group is also considering the possibility of a concert in Taiwan before it disbands at the end of 2020.    [FULL  STORY]

French filmmaker Tolt proves why travelers should go to Taiwan 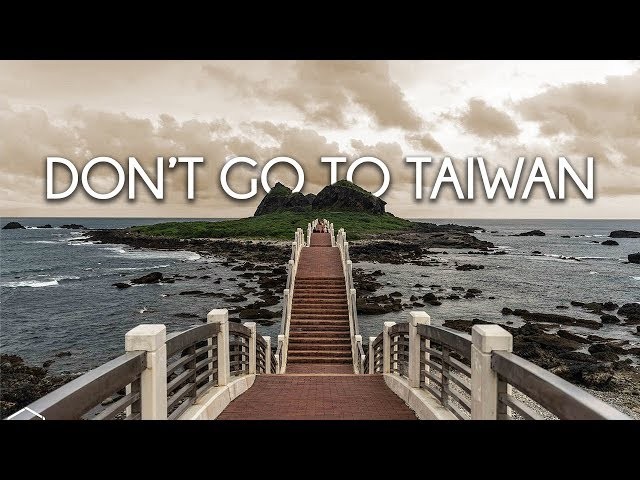 TAIPEI (Taiwan News) — French film director Benjamin Martinie, who goes by the handle "Tolt," has created a travel video introducing Taiwan with the contrarian title "Don't go to Taiwan" to prove why travelers should, in fact, visit the country.

The film is Martinie's ninth episode of a series of travel films intentionally given the admonishment "Don't go to… " Martinie, who specializes in travel films, says he deliberately chooses negative titles to use reverse psychology "to oppose negative misconceptions of the footage."

Martinie said that when he was approached by the Taiwan Tourism Bureau to produce a film about Taiwan, he was excited because he knew nothing about the country and was sure that the "'Made in Taiwan' vision we have in Western countries could only be false." After completing the project, Martinie said, "I was not disappointed! Honestly, it was a great trip."

The director lamented that he only had a week and said he wished he had been able to extend his stay. Martinie said he especially remembered "the warmth of Taiwanese people, its very surprisingly lush nature, and its amazing gastronomy."    [FULL  STORY]

Makoto Shinkai's 'Weathering With You' is a cinematic delight that also disappoints. 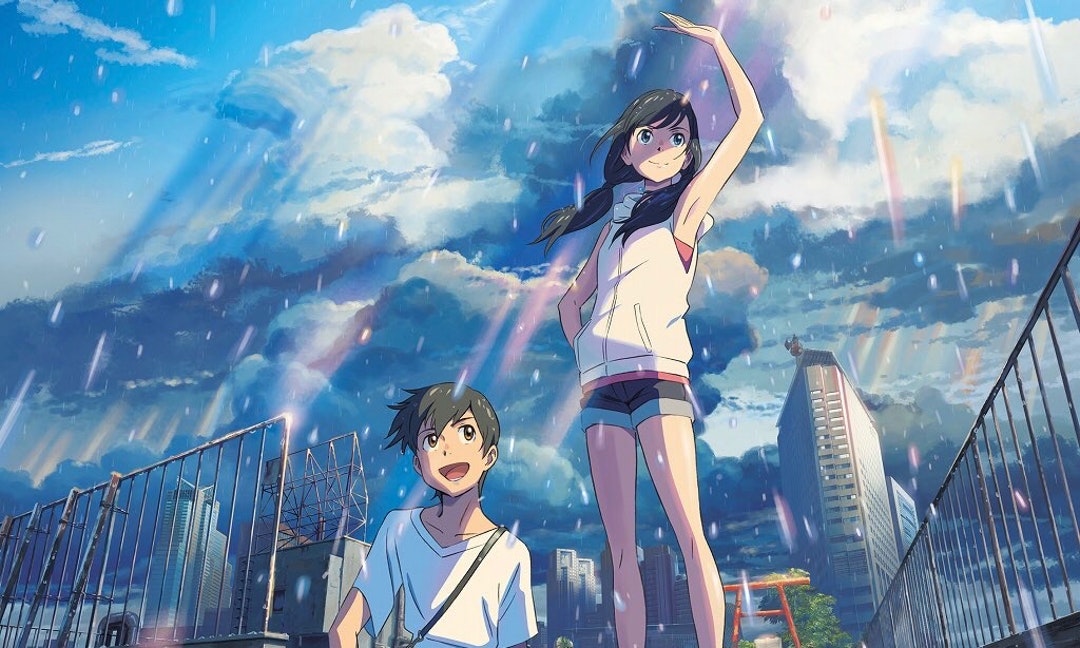 Photo Credit: Weathering With You (Tenki no Ko)

Two years after releasing Your Name (2016), one of the highest-grossing anime films of all time, director Makoto Shinkai returns to cinema by recycling the same formula for box office success, but with less magic.

Shinkai’s new film, Weathering With You (Tenki no Ko), again tells the story of a teenage girl with mystical powers, this time grounded in a more familiar backdrop: a flooding Tokyo.

In the rainy Tokyo, a runaway teenage boy Hodaka (voiced by Kotaro Daigo) is offered a job at an obscure magazine run by Suga (Shun Oguri) after struggling to survive between meals. Through Hodaka's initial struggle, Shinkai portrays Tokyo as a harsh metropolis for the underprivileged and accentuates the city’s apathy with the never-ending bad weather.

Hodaka's first assignment is to look for the mythical “Sunshine Girl” around Tokyo and eventually finds a teenage girl, Hina (Nana Mori), who had kindly offered him a burger when he was homeless and hungry. With the “superpower” of being able to pray for temporary good weather, Hina soon explodes in popularity with Hodaka’s help.    [FULL  STORY] 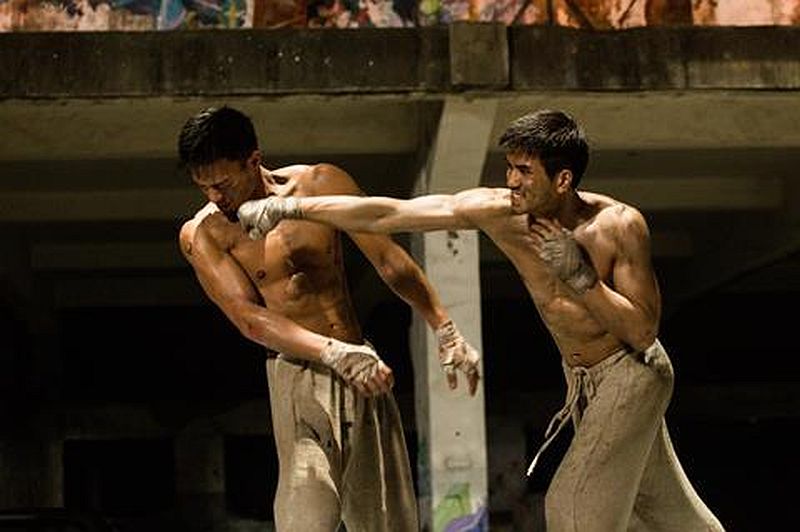 Currently in production, the action adventure has a strong ensemble cast of Taiwanese and Hong Kong actors, including Sunny Wang (Gatao), Rexen Cheng (Devil Fish: The Tag Along Sequel), Lee Kang Sheng (Stray Dogs) and Wiyona Yeung (We Are Legends).

The story revolves around a group of sailors on a perilous mission who start to suspect they’re being stalked by a sea monster. Andrew Lin will also star and handle visual effects. An actor with credits including The Loser Hero and Triple Tap, Lin was previously special effects supervisor on Hong Kong action horror Zombie Fight Club (2014).    [FULL  STORY] 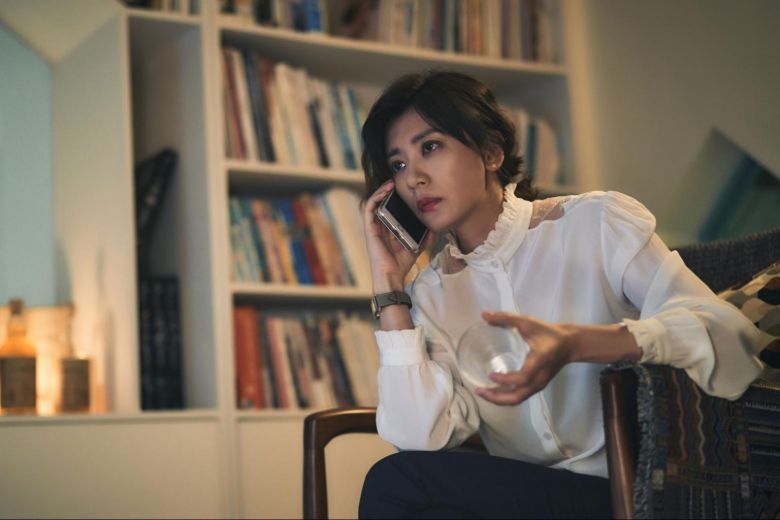 Television still from The World Between Us starring Alyssa Chia. She won best actress in a drama series at Taiwan’s Golden Bell Awards held in Taipei on Oct 5, 2019.PHOTO: HBO ASIA

TV viewers in Singapore have seen what Taiwanese actress Pets Tseng can bring to a drama series in her portrayal of a journalist in Mediacorp drama All Is Well.

On Saturday (Oct 5), further proof of her acting skills elsewhere came when she walked away with the prize for best supporting actress in a drama series at the Golden Bell Awards.

Her role in The World Between Us was not the only reward for the crime series, with the HBO Asia show also picking up five other major trophies.

At the ceremony – touted as Taiwan's equivalent of the American Emmys – held in Taipei, the drama's lead actress Alyssa Chia took best actress in a drama series.    [FULL  STORY]