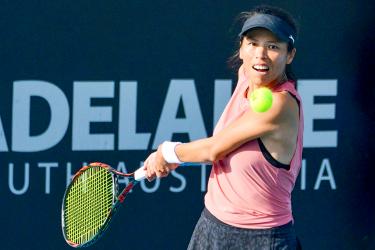 when they fell to a second consecutive first-round defeat, while fellow Taiwanese Hsieh Su-wei was ousted in the first round of the singles at the Adelaide International after a three-set battle with Aryna Sabalenka.

All looked well for top seeds Chan Hao-ching and Latisha Chan after they won the first set against unseeded Kateryna Bondarenko of Ukraine and Sharon Fichman of Canada, but the Taiwanese sisters could not maintain that momentum as they fell to a 2-6, 6-3, 10-4 defeat in 1 hour, 19 minutes.

The Chan sisters won only 55 percent of points on their first serve and 29 percent of their first-return points as they fell to a second straight first-round defeat after their earlier elimination at the Brisbane International last week.

India’s Sania Mirza won her first doubles match since returning to the WTA Tour following the birth of her son.    [FULL  STORY]