FRAUD: An online temple lighting scheme was a pretext for Jenn Lann Temple’s vice chairman to obtain loans for his own business, prosecutors said 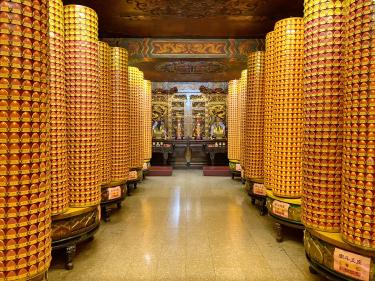 NT$1 million (US$32,415) after being questioned over suspected fraud involving the temple in Taichung and Chunghwa Telecom.

Taichung prosecutors on Tuesday raided several sites after receiving reports of alleged collusion between Cheng and other temple officials with the telecom.

Ten people were summoned for questioning about the scheme, which reportedly involved NT$30 million in illegal profit.

The case involved the practice of lighting “luminous lamps” (光明燈) in temples to pray for good fortune, health, or job advancement among other requests, with prices differing depending on their wishes.    [FULL  STORY]