INSIDE CONNECTION? DPP Legislator Huang Kuo-shu was asked to explain why posts by an ‘Internet army’ had the IP address of his office at the Legislative Yuan 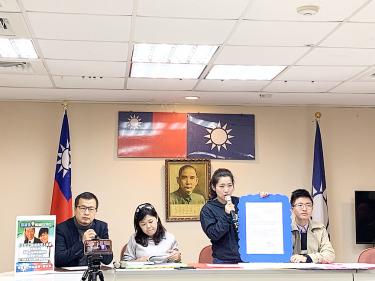 KMT Taipei City Councilor Hsu Chiao-hsin (徐巧芯) showed reporters in Taipei a 2016 letter in which Yi Shih, a company founded by Yang, appeared to ask the Taipei City Government to provide an official document approving the company’s cohosting of the WTA Taiwan Open.

The letter showed that it was copied to five city councilors, all of whom belong to the so-called “faction” of Representative to Japan Frank Hsieh (謝長廷), she said.

Yang might have sent the councilors duplicates to show the city government that she had the backing of the councilors, she added.

The copied councilors have not expressed their opinions on the matter, Taipei Department of Sports Deputy Commissioner Liu Ning-tien (劉寧添) said, adding that the government subsidies for the tournament were reviewed and awarded according to the regulations.    [FULL  STORY]