PRESIDENTIAL PRECEDENT: Ma’s office said that the ruling not only exonerated the former president, but also established ‘administrative authority’ under the Constitution 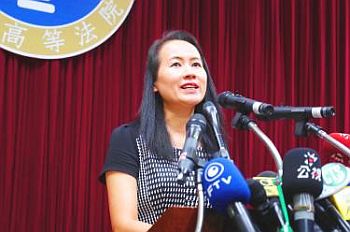 he leaked classified information and breached telecommunications security law stemming from wiretaps conducted in 2013 of leading political figures in the Legislative Yuan.

The Taipei District Court found Ma not guilty in the first ruling in 2017. Last year, the High Court found Ma guilty and handed down a four-month prison sentence. In January, the Supreme Court ordered a retrial and returned the case to the High Court, resulting in yesterday’s ruling, which is final.

Prosecutors focused on Ma’s interactions with then-prosecutor-general Huang Shih-ming (黃世銘), who led the now-defunct Special Investigation Division, and his acquiring of wiretap transcripts, which they said were contraventions of the Communication Security and Surveillance Act (通訊保障及監察法), the Personal Information Protection Act (個人資料保護法) and the Criminal Code.

The High Court yesterday said that it was Huang who requested a meeting with Ma and gave him the wiretap transcripts, adding that Ma did not use his authority as president to engage in illegal action.    [FULL  STORY]