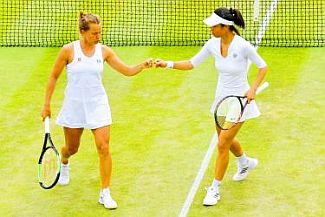 Taiwan&rsquo;s Hsieh Su-wei, right, fist-bumps the Czech Republic&rsquo;s Barbora Strycova after winning a point against Belgium&rsquo;s Elise Mertens and Belarus&rsquo; Aryna Sabalenka in their Wimbledon women&rsquo;s doubles quarter-final at the All England Lawn Tennis and Croquet Club in London on Wednesday.
Photo: AFP

Hsieh and her partner, Barbora Strycova of the Czech Republic, advanced to the semi-finals of the women’s doubles after toppling sixth seeds Elise Mertens of Belgium and Aryna Sabalenka of Belarus.

Hsieh and Strycova, both 33, won the first set 6-4. Keeping up the pressure on Mertens and Sabalenka, the Taiwanese-Czech duo cruised to a 6-2 victory in the second set to secure a spot in today’s semi-finals, in which they are to face France’s Kristina Mladenovic and Hungary’s Timea Babos.

The result avenges their previous encounter with the Belgian-Belarussian duo earlier this year at the Miami Open, where Hsieh and Strycova suffered defeat.    [FULL  STORY]