TAIPEI (Taiwan News) – An approach to the tri-lateral relationship between Taiwan, 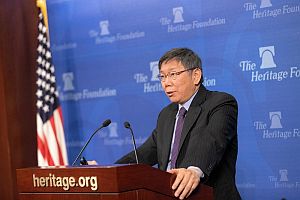 China, the United States suggested by Taipei Mayor Ko Wen-je (柯文哲) in an address delivered at the Heritage Foundation in Washington D.C. on March 20, has been criticized by a senior U.S. expert on Taiwan issues as being ambiguous and implicit, reports said.

In a speech titled “The Present Situation and Prospects for Taiwan,” Mayor Ko proposed an alternative for Taiwan’s cross-strait relations, arguing for closer ties with the U.S. while pursuing friendly relations with China.

The proposition was considered equivocal by Bonnie Glaser, a senior adviser for Asia at the Washington-based think tank, the Center for Strategic and International Studies (CSIS), who expressed her opinion about Ko’s address in an interview with Financial Times.

According to Glaser, a swing in attitude and an inclination towards vagueness don’t bode well for the tri-lateral relationship, based on what she has observed over the past decade. “Scars remain for the U.S. government” left by the Chen Shui-bian (陳水扁) administration, noted Glaser.   [FULL  STORY]