GROWTH OF ART: Organizers said that the lantern is a continuation of artist Lin Shuen-long’s ‘A Seed Fallen From the Sky,’ with the seed growing into a tall tree 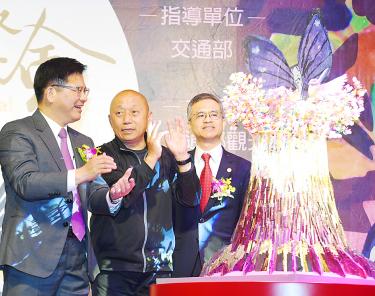 Artist Lin Shuen-long, center, yesterday talks with Minister of Transportation and Communications Lin Chia-lung, left, at a news conference at the Grand Hotel Taipei to unveil a model of the main lantern for this year&rsquo;s Taiwan Lantern Festival.
Photo: CNA

symbolizes the nation’s cities and its 23 million people, the Tourism Bureau said yesterday.

A model of the lantern, titled The Guardian of the Forest — Tree of Light (森生守護-光之樹), was unveiled at the Grand Hotel Taipei.

The main lantern would be displayed at the Houli Horse Ranch and Forest Park Area in Taichung, which is hosting the festival this year, the bureau said, adding that it would be illuminated for the first time at the opening ceremony on Feb. 8.

Shows featuring the main lantern would be presented on the hour while the festival is open from Feb. 8 to Feb. 23, the bureau said.    [FULL  STORY]