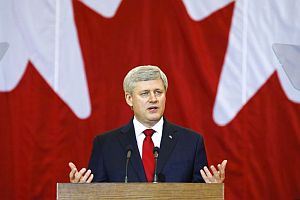 Stephen Harper is seen in a Jan. 30, 2015, file photo. In his address to the Yushan Forum, Harper spoke out against those whose ‘trade strategy is about accumulating perpetual large surpluses with other countries,’ arguing that such a structure is unsustainable.
MARK BLINCH/FOR THE GLOBE AND MAIL

Invited to Taipei to discuss the book he published last year, Mr. Harper also met with President Tsai Ing-wen, sitting as a guest of honour among other delegates to the Yushan Forum, an annual gathering designed to bolster Taiwan’s presence in Asia as it loses diplomatic partners under Chinese pressure.

Mr. Harper has toured the world to promote his consulting business and his book, Right Here, Right Now, a treatise on populism and the threats to Western democracies around the world.

But he landed in Taipei at a particularly fraught time, with Taiwan in a period of elevated tension with China and the relationship between Ottawa and Beijing in its worst state in three decades. Canada is in the midst of an election campaign, while Taiwan’s next presidential election is scheduled for January. Taiwan also marks its National Day on Thursday.    [FULL  STORY]