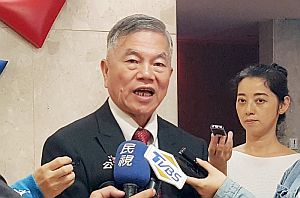 between the United States and China, Economics Minister Shen Jong-chin (沈榮津) still believed that Taiwanese businesses would continue their present policy of seeking alternatives to China and returning to the island.

The government’s policy of encouraging such moves has so far netted investment agreements totaling almost NT$700 billion (US$23 billion), a threshold likely to be crossed next week, with a year-end target of NT$800 billion, the Liberty Times reported.
[FULL  STORY]