ALMOST PITCH PERFECT: Starter Chiang Shao-ching took the win after striking out five, yielding only three hits and giving up only one run in the Group B opener

Taiwan yesterday began their Premier 12 Group B campaign on a high by defeating Puerto Rico 6-1, 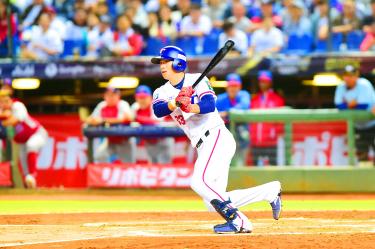 scoring three runs in a pivotal fifth inning to open up a close contest at the Taichung Intercontinental Baseball Stadium.

Second baseman Lin Li blasted a two-run homer in his first at-bat, then in the fifth laid down a bunt that drove in two runs on a fielding error to account for the winning margin.

Taiwan head coach Hong Yi-chung elected to start with Chiang Shao-ching, a 25-year-old right-hander who spent last season in the US with the Columbus Clippers, a Cleveland Indians triple-A team.