The populist mayor of Kaohsiung is a cultural phenomenon who looks set to make his presence known in Taiwan’s presidential race.

Han Kuo-yu is everywhere. To his supporters, he is a movement politician; a harbinger of 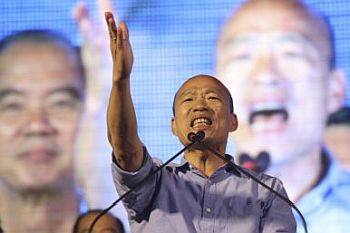 hope smashing an ineffectual Taiwanese political order. To others, his rapid ascent from fringe figure of the Kuomintang (KMT) to mayor of Kaohsiung, Taiwan’s second-largest city, is a civic catastrophe. Regardless, Han Kuo-yu is ubiquitous, dominating news cycles like no other public official in Taiwan.

In a poll published in February by the Chinese-language Apple Daily, Han, who has been mayor for less than three months, notched a 35.1 percent approval rating for Taiwan’s upcoming 2020 presidential election, beating out other KMT presidential hopefuls and incumbent President Tsai Ing-wen of the Democratic Progressive Party (DPP). Han remains mum on whether he plans to run, but the fact Taiwan is having this conversation is itself astounding.

Han, 61, is not exactly a political novice. He had a stint as KMT legislator from 1992 to 2001, mostly nondescript other than an incident in which he assaulted then-lawmaker and future President Chen Shui-bian. Han was a KMT outcast for years before resurfacing as head of a farmer’s association – in his mayoral campaign, he would call himself a “bald guy who sells vegetables.” In May 2018, he was quietly nominated by the KMT to run for mayor in the DPP stronghold of Kaohsiung, one year after losing a bid for KMT chairman in which he picked up just 5.8 percent of the vote. He received almost no party support in a race seen as a surefire win for DPP candidate Chen Chi-mai.    [FULL  STORY]