DEMOCRATIC GOVERNANCE: The first meeting is expected to be held in September, with a senior US State Department official leading a delegation to Taipei 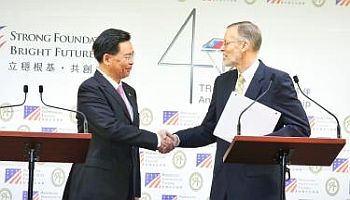 mechanism on democratic governance in the Indo-Pacific region, which would serve as a regular occasion for both sides to explore ways to assist other countries in the area in addressing governance challenges.

The creation of the Indo-Pacific Democratic Governance Consultations was announced by Minister of Foreign Affairs Joseph Wu (吳釗燮) and American Institute in Taiwan (AIT) Director Brent Christensen in a rare joint appearance at a news conference at the ministry in Taipei.

Good governance is one of the three pillars of the Indo-Pacific strategy of US President Donald Trump’s administration, Christensen said in his speech.

“The US and Taiwan share the belief that advancing transparency and rule of law in the region in turn contributes to the goal of a free, open and prosperous Indo-Pacific region,” he said, adding that the common conviction that all people deserve fundamental freedoms has served as an important basis for Washington’s partnership with Taipei.
[FULL  STORY]