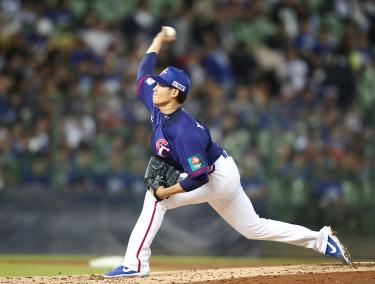 tournament after breaking a deadlock against Venezuela with late runs in their Group B game to win 3-0, while Japan shut out Puerto Rico 4-0 in Taoyuan to advance to the next round.

It was a tight affair over six innings at the Taichung Intercontinental Baseball Stadium, beginning with a duel of starting pitchers Chang Yi of Taiwan and Henderson Alvarez of Venezuela.

The hosts broke through for two runs in the seventh inning on two hits and a walk against Venezuela’s fifth pitcher, Miguel Socolovich.

Centerfielder Lin Che-hsuan reached first base on a walk before pinch hitter Chu Yu-hsien tagged Socolovich with a line drive near third base for a double, driving Lin home for Taiwan to take a 1-0 lead.    [FULL  STORY]