18 year old Ou-yang Nana has been targeted by netizens and Chinese govt. agencies for attending the show associated with Falun Gong 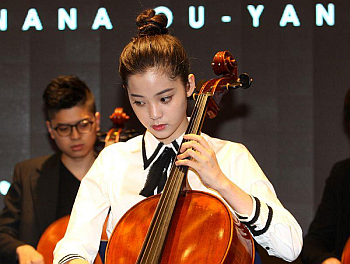 China, Ou-yang Nana (歐陽娜娜), has become a target of harassment by Chinese netizens, for her alleged support of Taiwan Independence, despite declaring that she recognizes herself as Chinese in a recent Facebook post.

On March 21, Ou-yang stated in a post to social media that she was proud to be Chinese. However, many Chinese netizens balked at her statement, declaring her an opportunist, and pointing out that she had not renounced her Taiwanese citizenship.

The actresses post was in response to reports that Ou-yang had attended a dance performance in 2010 that was staged by the famous Shenyun Dance troupe, which is affiliated with the Falun Gong religious group.

Ouyang along with her mother and sisters attended the Shenyun performance in New York City when she was only nine years old. A photo of the family taken almost ten years ago at the show was dug up by the State Council’s office for dealing with cult activity and shared to their official Weibo account.   [FULL  STORY]