Acer Inc. and Asustek Computer Inc. retained their titles as the fifth- and sixth-largest global PC 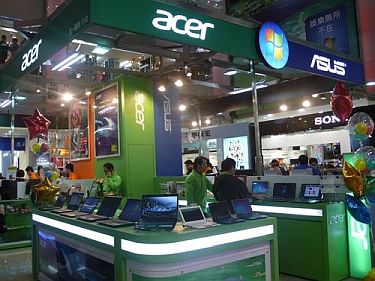 suppliers, respectively, in the third quarter of this year, according to global market information advisory firm Gartner Inc.

While PC shipments for the July-September period rose about 1 percent from a year earlier, Asustek still saw its shipments falling on a year-on-year basis, a research report dated Oct. 10 from Gartner showed.

However, Acer outperformed the global market in the third quarter, when the Taiwanese brand shipped 4.21 million PCs, down 4.4 percent from a year earlier, to take a 6.2 percent share, which was up from 6.0 percent seen a year earlier and also up from 5.4 percent in the second quarter, Gartner said.

PC shipments by Asustek dropped 4.4 percent from a year earlier to 3.82 million units, with a global market share of 5.6 percent worldwide in the third quarter.    [FULL  STORY]