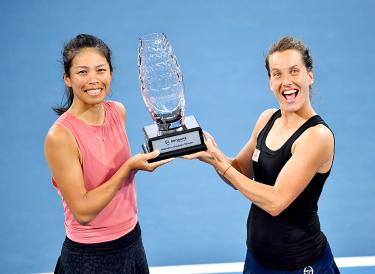 Taiwan&rsquo;s Hsieh Su-wei, left, and Barbora Strycova of the Czech Republic hold the winners&rsquo; trophy after their triumph in their women&rsquo;s doubles final against Ashleigh Barty and Kiki Bertens at the Brisbane International in Australia yesterday.
Photo: EPA-EFE

championship point to claim their first doubles title of season at the Brisbane International.

The top seeds rallied after dropping the first set and a break in the second to complete a 3-6, 7-6 (9/7), 10-8 victory over Ashleigh Barty and Kiki Bertens in 1 hour, 45 minutes at Pat Rafter Arena.

After conceding the first set and falling behind in the second, the Taiwanese-Czech duo had to dig deep, saving championship point on Hsieh’s serve before forcing a super tiebreak.

They carried that momentum into the decider to race to a 6-1 lead, but the Australian-Dutch pairing fought back to 6-5 in front of a partisan crowd cheering for Queenslander Barty.    [FULL  STORY]