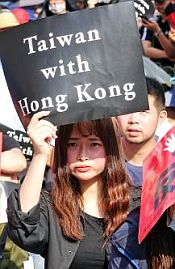 A woman holds up a placard during a demonstration outside the Legislative Yuan in Taipei yesterday.
Photo: Fang Pin-chao, Taipei Times

Thousands of people yesterday rallied outside the Legislative Yuan in Taipei, demanding that the Hong Kong government withdraw its controversial extradition bill and release protesters arrested in connection with demonstrations in the territory last week.

Although Hong Kong Chief Executive Carrie Lam (林鄭月娥) on Saturday said that the reviews of the bill in Hong Kong’s Legislative Council would be suspended, it was not withdrawn, said TYAD member Michelle Wu (吳奕柔), who is also president of the National Taiwan University Student Association.

If passed, the bill would allow anyone arrested in Hong Kong to be extradited to mainland China for trial, subjecting them to that nation’s notoriously opaque judicial system, she said.    [FULL  STORY]