STRIKING DEALS: Ignoring concerns about antagonizing China, the US president has taken a more aggressive approach amid talks to settle a trade dispute with Beijing 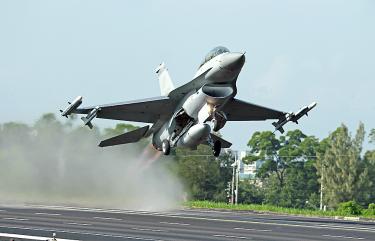 Trump’s advisers encouraged Taiwan to submit a formal request for the jets, built by Lockheed Martin, which it did this month, said the people, who asked not be identified discussing internal discussions.

Any such request would need to be converted into a formal proposal by the US departments of defense and state, and then US Congress would have 30 days to decide whether to block the sale.

The administration of then-US president Barack Obama in 2011 rejected a similar Taiwanese request over concern about antagonizing China.    [FULL  STORY]