‘CALCULATED ARRANGEMENT’: The president said that Han’s visit to China’s liaison office might have been designed to create an impression of ‘one country, two systems’ 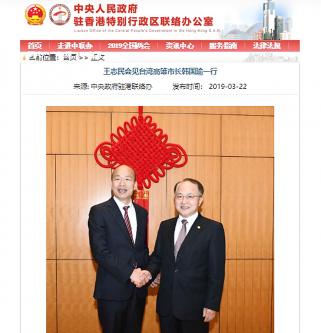 liaison office in Hong Kong has incurred criticism from President Tsai Ing-wen (蔡英文), who said it could give the impression that Beijing’s “one country, two systems” model might be applicable to Taiwan. Han was also criticized by several pro-democracy Hong Kong lawmakers, who slammed what they called an endorsement of China’s “distorted implementation” of the framework.

Han is leading a 28-member delegation on a visit to Hong Kong, Macau and the Chinese cities of Shenzhen and Xiamen to promote trade before returning to Kaohsiung on Thursday next week.

On Friday, he met with Chinese Liaison Office of the Central People’s Government in the Hong Kong Special Administrative Region Director Wang Zhimin (王志民). The meeting was not included in the itinerary published by Han’s office prior to the trip.

Tsai, who was in Palau on a state visit to three Pacific allies, yesterday said that the office is a key organization responsible for China’s implementation of the “one country, two systems” framework in Hong Kong.    [FULL  STORY]