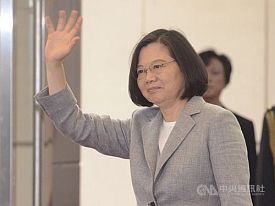 In previous visits by Taiwan's presidents to foreign allies, the stopovers in the U.S., which angered Beijing, were usually seen as an indicator of U.S.-Taiwan relations. Things like in which cities the president stopped over and whom the president met were taken into account, and were regarded as very sensitive and important.

Tsai will visit Haiti, Saint Kitts and Nevis, St. Vincent and the Grenadines and Saint Lucia on this trip dubbed the "Tour for Freedom, Democracy and Sustainability," according to the itinerary released by MOFA.

The stopover in New York is symbolic as the city is considered one of America's most influential metropolises and a cultural, financial and media capital. However, the details of her New York transit were not revealed.    [FULL  STORY]