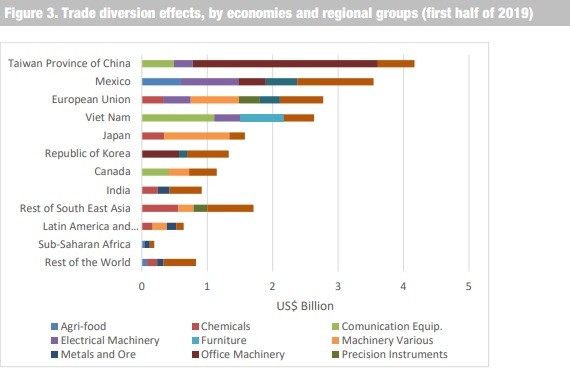 TAIPEI (Taiwan News) — A report by the UN Conference on Trade and Development (UNCTAD) released on Tuesday (Nov. 5) concludes that Taiwan is the biggest beneficiary of the U.S.-China trade war, inadvertently recognizing Taiwan as a separate country from China while still paying lip service to Beijing.

On Tuesday, the UNCTAD released a report titled "Trade and Trade Diversion Effects of United States Tariffs on China," which decried U.S. tariffs on China as "economically hurting both countries." However, the organization acknowledged that the trade diversion effects have increased imports from nations not directly engaged in the trade war and brought "substantial benefits" to Taiwan, Mexico, and the European Union.

Of the countries listed in the report, Taiwan was singled out as the top beneficiary of the trade diversion effects of U.S. tariffs leveled against China. In the first half of 2019, Taiwan saw an increase of US$4.2 billion (NT$127.8 billion) in exports to the U.S., according to the report.

In terms of industry sectors, the report stated that a high percentage of increased exports to the U.S. came in the form of office machinery and communication equipment. China, which had previously dominated the market in office machinery, saw a drop of US$10 billion during the first half of the year, with Taiwan taking up US$2.8 billion of the US$4.5 billion in trade diversion effects.
[FULL  STORY]