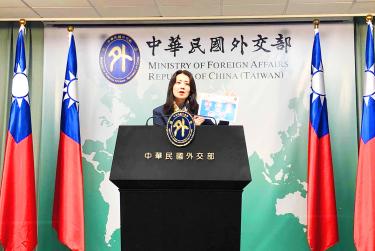 Ministry of Foreign Affairs spokeswoman Joanne Ou speaks at a news conference at the ministry in Taipei yesterday.
Photo: CNA

traveled to Australia on working holiday visas were forced to perform sexual favors for their employer.

In a report published in October titled Slavery and Slavery-like Practices in South Australia: A Report, Flinders University associate professor Marinella Marmo cited an anonymous representative of Australia’s National Union of Workers as saying that eight Taiwanese women on working holiday visas in South Australia’s Riverland region were “expected to, if they wanted to get to work, so they could afford to pay for all these other things, perform sexual favors to get more hours.”

They were “in that environment for quite some time before they were able to speak up, for six months,” the report said.    [FULL  STORY]