CURTAILS FREEDOMS? The Suicide Prevention Act has provisions on regulating media reporting that could ‘teach, cause or entice people to committing suicide’ 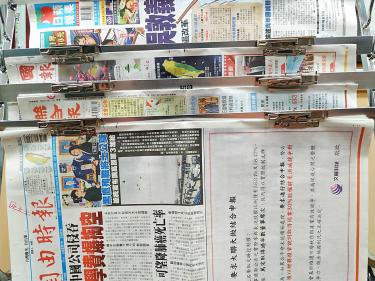 Prevention Act (自殺防治法) that prohibits newspapers from printing stories about suicide on the front page, saying that the rule has overstepped the act’s jurisdiction and risks curtailing freedom of the press.

The act, passed in May last year and promulgated in June, includes provisions on regulating media regarding reporting that could “teach, cause or entice people to committing suicide.”

The association stated that, despite the good intention, items No. 6 and 8 of Article 13, which covers reporting on suicides, could contradict the act’s purpose.

Item No. 6 states that the media should not “post/print pictures, illustrations or videos of suicides or pass/show media Web site links to content about suicides,” while item No. 8 states that such stories “should not be used for front-page material, listed on Web site homepages or be repetitively reported on.”    [FULL  STORY]