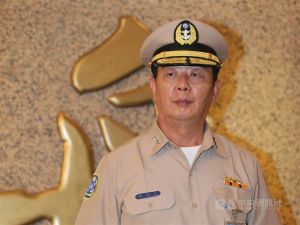 (ROC) Navy Admiral Huang Shu-kuang (黃曙光) to the post of Chief of the General Staff Wednesday.

Huang will succeed Shen Yi-ming (沈一鳴), who was killed in a Jan. 2 military helicopter crash, effective Jan. 16, the Ministry of National Defense (MND) said in a statement that day.

Following Huang's appointment, his previous post will be taken by Deputy Chief of General Staff Admiral Liu Chih-pin (劉志斌), who has been acting Chief of the General Staff since the crash, the MND said.

Meanwhile, Lt. Gen. Hsu Yen-pu (徐衍璞) will take the post left vacant by Liu as Deputy Chief of General Staff and be promoted to the rank of three-star general. He will be the first three-star general of indigenous descent.    [FULL  STORY]