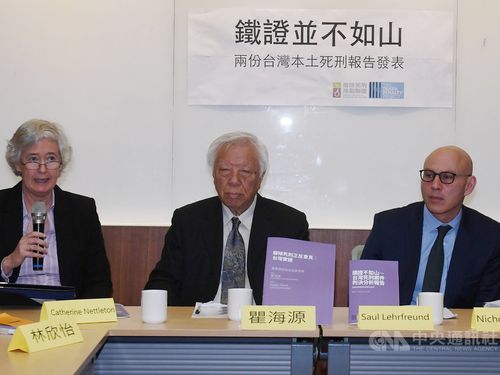 Taipei, March 18 (CNA) The British Office Taipei, which maintains and develops relations between the United Kingdom and Taiwan, called on Monday for Taiwan to abolish the death penalty on the basis of human rights.

Capital punishment should not exist in a democratic society where human rights are respected, according to the U.K.’s representative to Taiwan Catherine Nettleton.

Speaking at a press conference in Taipei to discuss the reports “For or against abolition of the death penalty: Evidence from Taiwan,” and “Unsafe convictions in capital cases in Taiwan” released Sunday, Nettleton said in the mind of the British, the “death penalty” is no longer an option.

The reports were jointly compiled by the London-based Death Penalty Project (DPP) and Taiwan Alliance to End the Death Penalty (TAEDP), which revealed concerns over the administration of criminal justice in Taiwan.    [FULL  STORY]