AIR GUARDIAN: Permitless operators, failure to cease operations and recidivism are among the situations where offenders could be fined NT$20m, the EPA said 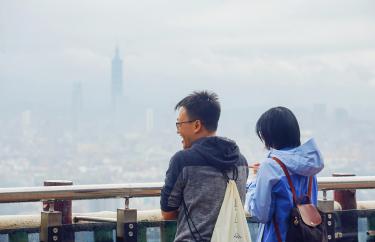 A couple looks at the Taipei skyline shrouded in smog on March 3.Photo: CNA

that outline which breaches of the Air Pollution Control Act (空氣污染防制法) would bring the maximum fine of NT$20 million (US$648,677), saying fines could be calculated according to the frequency of violations.

The maximum fine was increased from NT$1 million after amendments to the law took effect in August last year, the EPA said, adding that its guidelines outline situations that would warrant the new maximum fine.

Serious breaches include pollution emitters that do not have permits, those that fail to halt operations as ordered and those that repeatedly contravene the act after being told to improve twice within a year, it said.