SHALLOW WATERS: Satellite photographs show that the coastline has changed dramatically and marine animals no longer have caverns and boulders to hide in 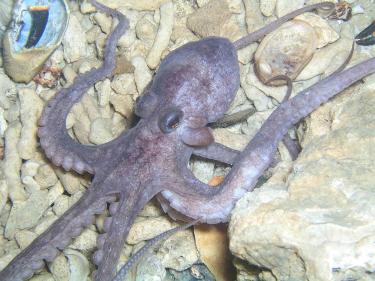 An octopus native to the waters north of Penghu County is pictured in an undated photograph. The species has yet to be named.Photo courtesy of the Agriculture and Fisheries Bureau of Penghu County Government

The octopus normally lives off the coast of Yuanbei Village (員貝) and near Jibei Village (吉貝) between the months of February and May, but over the past few years it has rarely been seen, Yuanbei Warden Chen Tien-jui (陳天瑞) said.

Chen believes the octopus’ declining population is due to changes in the ecosystem.

Normally the octopus lays its eggs in the intertidal zone in the northern part of the county between the Lantern Festival and Tomb Sweeping Day.    [FULL  STORY]