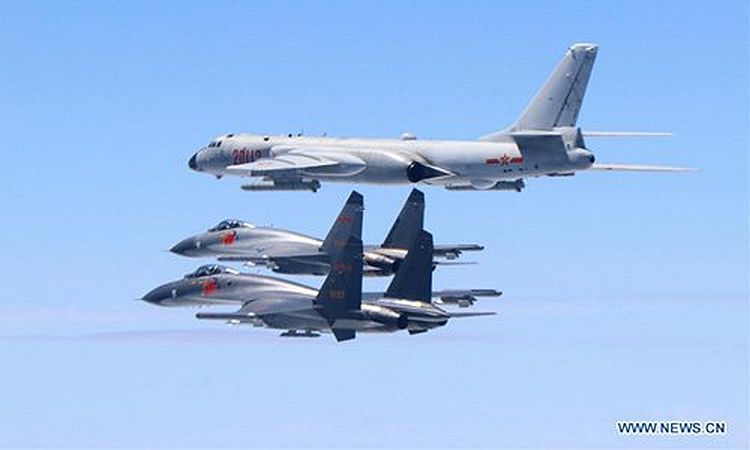 Two J-11 fighter jets and a H-6K bomber fly in formation on May 11, 2018. The People’s Liberation Army (PLA) air force conducted patrol training over China’s island of Taiwan on May 11. Su-35 fighter jets flew over the Bashi Channel in formation with the H-6Ks for the first time, which marks a new breakthrough in island patrol patterns, said Shen Jinke, spokesperson for the PLA air force. Photo: Xinhua

The US is deploying a double standard by calling China's proposed sanctions on US companies for arms sales to Taiwan a "foolish action," Chinese mainland analysts said on Sunday, pointing out that the sanctions could not only cut base material supply to these companies including rare earths but also block their non-military products from entering Chinese markets.

After the US government approved a plan to sell $2.22 billion worth of arms to Taiwan, Chinese Foreign Ministry spokesperson Geng Shuang announced at a routine press briefing on Friday that to safeguard national interests, China would impose sanctions on US enterprises participating in the sales.

Citing data released by the US Department of Defense, Chinese state-owned media identified these firms as Raytheon that provides Stinger missiles, General Dynamics  that provides M1A2T tanks, and BAE and Oshkosh that provide tanks equipment.

US Senator Bob Menendez, the top Democrat on the Senate Foreign Relations Committee, told media that it was a foolish action as the companies that would possibly be sanctioned were not very much going to be engaged in defense industry sales to China, according to a short video VOA Chinese posted on its Twitter account on Sunday.     [FULL  STORY]