TRANSITIONAL JUSTICE: Advocates hailed the decision as a landmark and expressed hope that it would start equal talks between Truku, the government and Asia Cement 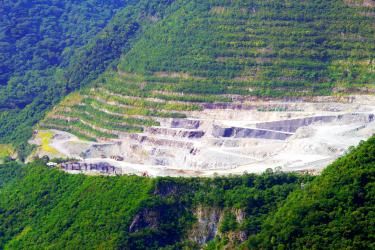 renewal for a mine in Hualien County’s Sincheng Township (新城), giving the Truku people a hard-won victory, civic groups said.

After operating the marble quarry for nearly 40 years, the company’s application to extend its permit to continue operations for another 20 years was approved by the Ministry of Economic Affairs in March 2017, months before it was set to expire on Nov. 22, 2017.

A massive protest gathered on Taipei’s Ketagalan Boulevard in June 2017, after aerial footage shot by filmmaker Chi Po-lin (齊柏林) — who was killed on June 10, 2017, in a helicopter crash while at work — appeared to show that the firm had expanded its operations at the quarry.

After reviewing an administrative lawsuit filed by four Truku against the ministry in 2017, the court yesterday ordered the ministry to revoke its approval for the permit extension, as well as its rejection of the appeal.    [FULL  STORY]