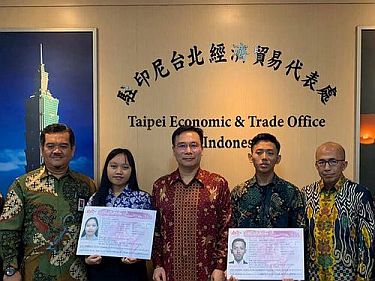 visas on Thursday under a trial relaxed direct hiring scheme, according to Taiwan's representative office in Jakarta.

The two Indonesian nationals will work in the manufacturing sector in Taiwan, while another seven will follow, officials from the Taipei Economic and Trade Office (TETO) in Jakarta told CNA on Thursday.

Although the direct hiring scheme between Taiwan and Indonesia has been in effect for several years, it only applied to Indonesian workers who have been hired in Taiwan.

The new arrangement, which was implemented in July, allows first-time Indonesian manufacturing workers to use the direct hiring scheme. Each application is expected to be processed within two months, the office said.    [FULL  STORY]