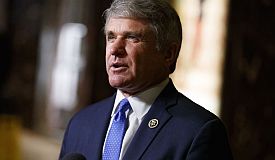 Chinese aggression towards Taiwan in an interview with Fox News on Sunday (July 14), defending the recent sale of U.S. military hardware to Taiwan.

A Republican congressman from Texas, McCaul appeared on Fox News, stating that the US$2.2 billion arms sale “sends a very strong message to China.” McCaul affirmed that the U.S. is “going to arm Taiwan so she can defend herself from what’s become a very aggressive Chinese Communist Party right on the doorstep.”

McCaul, along with Democratic Representative Eliot Engel, approved the arms deal that includes 108 M1A2T Abrams tanks, 250 Stinger anti-aircraft missiles, and Hercules armored vehicles. McCaul and Engel were part of a group of U.S. lawmakers that met with Taiwan President Tsai Ing-wen during her recent visit to New York.

The arms deal has deepened the animosity between the U.S. and China amid their ongoing trade war. China’s Foreign Ministry spokesman Geng Shuang (耿爽) has come out in “resolute opposition” to the deal, demanding it be canceled. Meanwhile, the U.S. State Department has responded that it does not intend to change its plans.   [FULL  STORY]