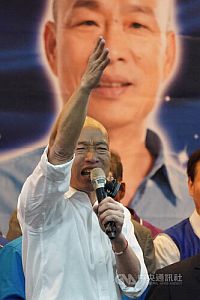 Kuo-yu (韓國瑜), the presidential candidate of the main opposition Kuomintang, to present evidence to backs his accusation that the state apparatus leaked his personal information.

Han was exposed by tabloid Next Magazine Wednesday to have purchased a luxury apartment in Taipei for NT$72 million (US$2.37 million) in 2011, a year before he took office as the general manager of Taipei Agricultural Products Marketing Corp.

The report raised questions about Han's integrity, as he has been promoting himself as a "plebeian" presidential candidate without a big fortune nor influential background.

DPP lawmaker Wang Ting-yu (王定宇) has blasted Han for "faking" his image as a common person.

In response, Han accused the media of invading his privacy on Thursday. He said the information about his property purchase in Nangang District from Taiwan Fertilizer Co. is personal information that is not open to the public because at the time of the purchase, neither he nor his wife Lee Chia-fen (李佳芬) held public office.    [FULL  STORY]