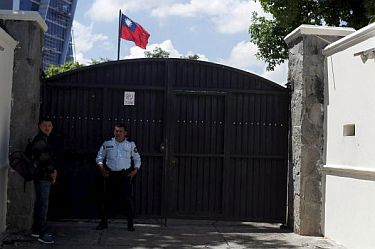 A man waits to visit the Taiwan embassy a day after the Salvadoran government announced that it has broken off diplomatic relations with Taiwan, in San Salvador, El Salvador August 21, 2018. REUTERS/Jose Cabezas

economy would get a lift from China after it broke diplomatic ties with Taiwan in favor of Beijing, reducing the dwindling group of allies the Asian island has in Latin America.

El Salvador was the third Latin American country in the past two years to switch alliances, and presidential spokesman Roberto Lorenzana said attracting investment and developing the economy were key goals behind the decision.

“Fundamentally, it’s an interest in betting on the growth of our country with one of the world’s most booming economies,” he said in a television interview following Monday’s announcement. “El Salvador can’t turn its back on international reality.”

Monday’s move left Taiwan with only 17 allies, and came shortly after its president visited Belize and Paraguay, aiming to shore up diplomatic ties in the face of Chinese pressure to stamp out the island’s international recognition.    [FULL  STORY]