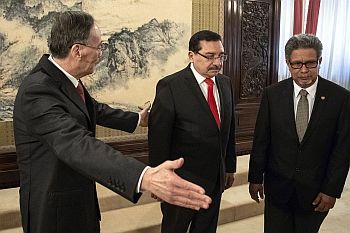 Chinese Vice President Wang Qishan, left, shows the way to Medardo Gonzalez, center, a Salvadoran politician, Secretary General of the ruling party of El Salvador, and El Salvador Foreign Minister Carlos Castaneda during their meeting at the Zhongnanhai Leadership Compound in Beijing Tuesday, Aug. 21, 2018. Taiwan broke off diplomatic ties with El Salvador on Tuesday as the Central American country defected to rival Beijing in the latest blow to the self-ruled island China has been trying to isolate on the global stage. (Roman Pilipey/Pool Photo via AP) (Associated Press)

having asked Taiwan for money in exchange for maintaining diplomatic relations with the self-governing island, saying its decision to switch recognition to China was due to the enormous advantages of trading with the economic giant.

In an interview with state television, presidential spokesman Roberto Lorenzana called Taiwan’s allegations “base” and “totally false,” noting that other countries have opted to have diplomatic and commercial relations with Beijing.

“We cannot turn our back on the world, ignore that China is the second largest power in the world and the leading export economy on the planet,” Lorenzana said. “It is key for our country.”

President Salvador Sanchez Ceren announced Monday night in a televised address that his country would break from more than 80 years of relations with Taipei and immediately switch to Beijing.    [FULL  STORY]