NOT GIVING IN: The Taoyuan Flight Attendants’ Union said that its strike was legal and that the law guarantees legal strikes immunity from civil and criminal liability 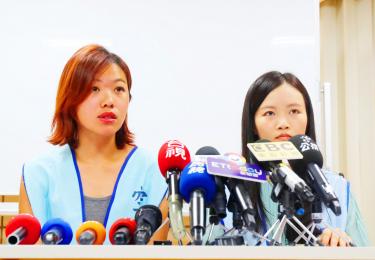 Taoyuan Flight Attendants’ Union — despite the two sides signing an agreement to end a strike at midnight today — as it is seeking to protect its shareholders’ interests.

The airline filed the lawsuit at the Taipei District Court on June 21, saying the union had contravened the Act for Settlement of Labor-Management Disputes (勞資爭議處理法).

The union said that one of the reasons it launched the strike was the airline’s rejection of its request to employ a labor director, but such a request is not permitted under the act, EVA said as it filed the suit, adding that it would seek compensation of NT$34 million (US$1.09 million) for every day that the strike lasted.

At talks on Saturday, the union asked the airline to drop the lawsuit, but EVA declined.
[FULL  STORY]