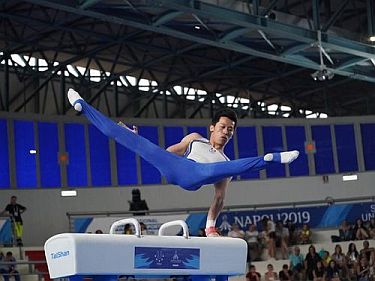 pommel horse event at the 2019 Summer Universiade in Naples Sunday, successfully defending the title he won in Taipei in 2017.

Lee advanced to the finals with the highest score of 15.150 among 55 athletes and won gold with an even higher score of 15.400, besting seven other finalists with his "Thomas Flair" technique.

He was the only athlete to receive a score higher than 15 and became the first Taiwanese gymnast to win consecutive golds at the Universiade.