WOMEN’S DOUBLES: If the Hsieh-Strycova duo and Chan sisters pairing defeat their next matchups, the two doubles teams would go head-to-head in the quarter-finals 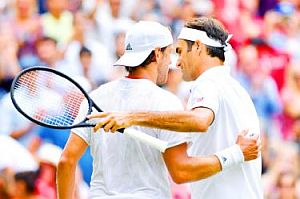 pressure on competitors in the women’s doubles at Wimbledon, taking them to the round of 16.

The third-seeded duo beat Switzerland’s Viktorija Golubic and Russia’s Ekaterina Alexandrova 6-2, 6-2 to stay in the tournament. They next face the 15th-seeded Romanian pairing of Irina-Camelia Begu and Monica Niculescu.

If Hsieh and Strycova win their match tomorrow and the sister team of Latisha Chan and Chan Hao-ching defeat their matchup with sixth-seeded duo Elise Mertens of Belgium and Aryna Sabalenka of Belarus, the two pairings from Taiwan would go head-to-head in the quarter-finals.

Meanwhile, eight-time Wimbledon singles champion Roger Federer registered a record 350th win in Grand Slam matches in his 7-5, 6-2, 7-6 (7/4) victory over Lucas Pouille of France and in the process reached the fourth round for an unprecedented 17th time.    [FULL  STORY]