APPROACHED: Michael Tsai said that the TAO tried to invite him to a conference in China and a promised meeting with the CCP’s leader eight months after he left office 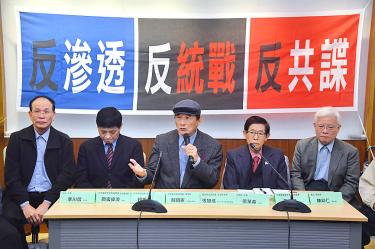 against Beijing’s infiltration, saying that high-level Chinese Communist Party (CCP) officials had tried to establish contact with him months after he left office in May 2008.

“China’s infiltration programs target not only the Chinese Nationalist Party [KMT] and the media, but also people in the pan-blue camp and even those in the Democratic Progressive Party [DPP] and the pan-green camp,” Tsai told a news conference in Taipei.

A Taiwanese entrepreneur doing business in China had relayed a message to him from China’s Taiwan Affairs Office (TAO), he said.

“The TAO wanted to invite me to attend an international conference in China and they said I would be received by the leader of the CCP,” he said.    [FULL  STORY]