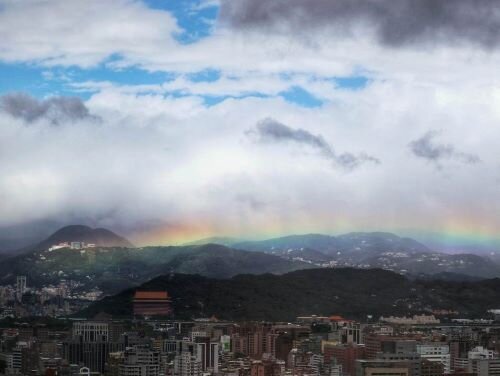 Taipei, Dec. 2 (CNA) Chinese Culture University, located in a part of Taipei where the world's longest rainbow ever occurred, has developed a rainbow forecasting system aimed at giving tourists, meteorologists and photographers directions for rainbow watching.

"We hope the service, which is only available for the region, can bring more people to look for rainbows on our campus," said Chou Kun-hsuan (周昆炫), a professor from the university's Department of Atmospheric Science on Monday.

Chou told CNA that the inspiration for the system came after he, his colleagues and students documented a rainbow in Yangmingshan that lasted almost nine hours in 2017, which was recognized by Guinness World Records the next year as the longest rainbow ever recorded.

He received many inquiries wondering when it would be possible to forecast rainbows, prompting him to analyze weather conditions between Nov. 1, 2018 and Jan. 31, 2019, when a rainbow appeared on 23 of those days and established the forecasting system in June.
[FULL  STORY]