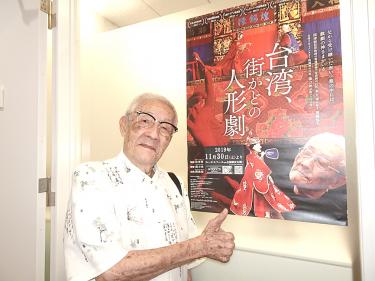 Puppetry master Chen Hsi-huang gestures beside a poster of the documentary Red Box by director Yang Li-chou at the Taiwan Cultural Center in Tokyo in September.
Photo: CNA

Tokyo on Friday, ahead of its nationwide release in Japan later this month.

Red Box (紅盒子), by Taiwanese director Yang Li-chou (楊力州), tells the story of 88-year-old Chen, a descendent of a famous Taiwanese theater family, who has become a national treasure because of his mastery of the traditional art.

On a promotional tour in Japan this week, Yang said the documentary was a kind of sequel to Hou Hsiao-hsien’s (侯孝賢) 1993 film The Puppetmaster (戲夢人生), which profiled Chen’s father, Li Tien-lu (李天祿).

According to Yang, Red Box delves into the complicated father-son relationship between the two artists — including the circumstances that led to them using different surnames — and explores the uncertain future of traditional arts in the modern world.    [FULL  STORY]