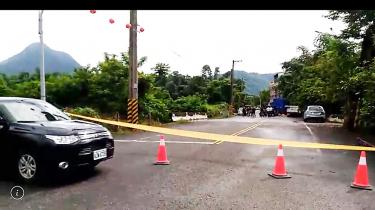 A section of road in Chiayi County&rsquo;s Dapu Township is cordoned off after a gunfight between police and a wanted criminal yesterday.
Photo copied by Tsai Tsung-hsun, Taipei Times

in a gunfight in a rural area in Chiayi County after he refused to surrender to police.

An initial assessment of Chen’s body showed that he sustained two bullet wounds, with a fatal wound to the head and another to the left calf, Criminal Investigation Bureau (CIB) Deputy Commissioner Chu Tsung-tai (朱宗泰) said.

Chen, 58, remained in hiding for three years, and was considered dangerous after being listed as a wanted criminal for illegal firearms possession and attempted murder.

He was involved in a shooting in 2016 in Yunlin County and in 2017 fired at Tainan County police officers.    [FULL  STORY]