WIDE RANGE: A text alert was supposed to be sent to residents living within 300m of Kaishan Borough, but the unit of distance was later changed to kilometers 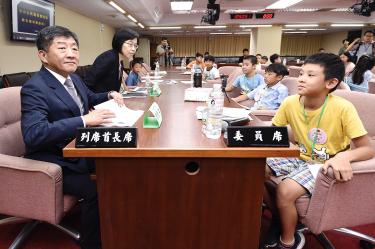 alert that was mistakenly sent to mobile phone users nationwide on Tuesday.

The alert was sent at about noon, warning residents of Tainan’s Kaishan Borough (開山) of an indigenous dengue fever outbreak in the area.

The message, signed by the Tainan City Government and the Centers for Disease Control, asked residents to take measures to prevent mosquito bites, routinely empty water containers and undergo an NS1 antigen test at a hospital should symptoms such as fever, headache, joint pain or rashes appear.

The alert was originally set up to be sent to residents within 300m of the borough, but the unit of distance was later changed to kilometers, Chen said during a visit to a summer camp for children in grades three to six organized by Democratic Progressive Party (DPP) Legislator Lin Shu-fen (林淑芬).    [FULL  STORY]