STATISTICAL CAUTION: Strandings might be reported more due to an increased focus on conservation, so long-term observations are needed to prove a trend 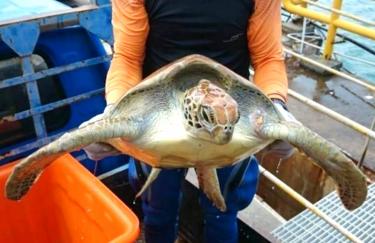 A person holds a turtle in Kaohsiung on Friday.
Photo copied by Hung Ting-hung, Taipei Times

other waste produced by humans, while most were found on the coasts of southern and eastern Taiwan, the Ocean Conservation Administration (OCA) said in a report on Friday.

Established in April last year as part of the Ocean Affairs Council, the OCA in April released the first of its quarterly reports on strandings of cetaceans and sea turtles.

Mass strandings of cetaceans have been reported around the globe this year, the agency said, citing reports that more than 260 dolphins have beached along the northern Gulf of Mexico since February.

In the second quarter, the agency received reports of 71 stranded turtles — 24 more than the average reported in the same period for the previous three years, the report showed.
[FULL  STORY]