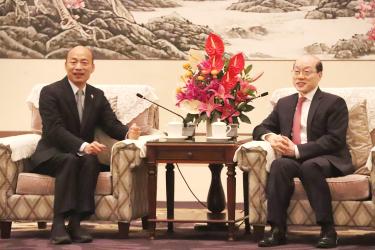 Although he had expressed his support for the “1992 consensus” prior to last year’s elections, he found it important to reiterate it due to its importance, Han said.

The “1992 consensus” is the “magical needle that stabilizes the sea,” Han told Liu, alluding to a tale in Journey to the West (西遊記).

With the “1992 consensus,” cross-strait relations, be they cultural, economical, sports or other aspects, would run smoothly, he added.    [FULL  STORY]