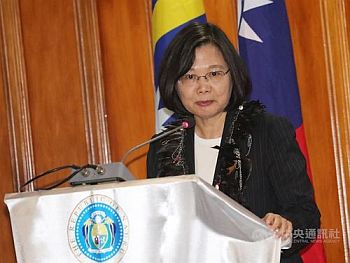 Beijing’s “one China” principle and “one country, two systems” framework, during a visit by Taiwan President Tsai Ing-wen (蔡英文).

Nauru President Baron Divavesi Waqa read the resolution, stating that members of the parliament rejected the “one China principle” and “one country, two systems” framework and recognized Taiwan as a sovereign and independent nation. Waqa is the first foreign head of state to have publicly expressed opposition in parliament to China’s “one country, two systems” framework.

Tsai flew to Nauru from Palau on Sunday to continue her eight-day visit to three of Taiwan’s diplomatic allies in the Pacific, including the Marshall Islands.

On Monday morning at the Nauru government building complex, Tsai was given a grand welcome, which included a traditional dance by Nauruan students and a police parade.
[FULL STORY]